An important ramification of swarm control research involves manoeuvring a spatially dispersed system from one formation to another. We consider the problem of changing smoothly between formations of spatially deployed swarm systems. We are interested in addressing scenarios in which gradual and seamless formation transitions are needed, a problem which we term "formation morphing". We show that this can be achieved by routing agents on a Euclidean graph that corresponds to paths computed on - and projected from - an underlying three-dimensional matching graph. The three-dimensional matching graph is advantageous in that it simultaneously represents a logical assignment problem (for which an optimal solution must be sought) and metric information that comprises the spatial aspects of the Euclidean graph.

Figures above: a swarm of drones moving across some narrow space.

It is challenging for an autonomous robot to make decisions in a dynamic environment in the presence of other moving vehicles. Decisions of the robot must be computed fast to cope with uncertain or disrupting behaviors of other vehicles (either autonomous or non-autonomous, but are not under our control). To overcome this challenge, the robot planning requires certain look-ahead knowledge of the dynamics for both our robot and other vehicles. We first predict the future state distributions of other vehicles to account for their uncertain behaviors affected by the time-varying disturbances. We then construct a dynamic-obstacle-aware reachable space that contains states with high probabilities to be reached by the robot, within which the optimal action policy is searched. Since, in general, the dynamics of both the vehicle and the environmental disturbances are nonlinear, we utilize a nonlinear Gaussian filter – the unscented transform – to approximate the future state distributions.

We integrate low-level flight motion control with high-level team coordination. For example, the team formation was navigated to move in 3D space by following a reference trajectory outlined by a series of discrete waypoints specified as external inputs. Our results showed that the swarm formation could move as fast as 2.5m/s within a confined indoor environment where the designated formations were always well maintained. 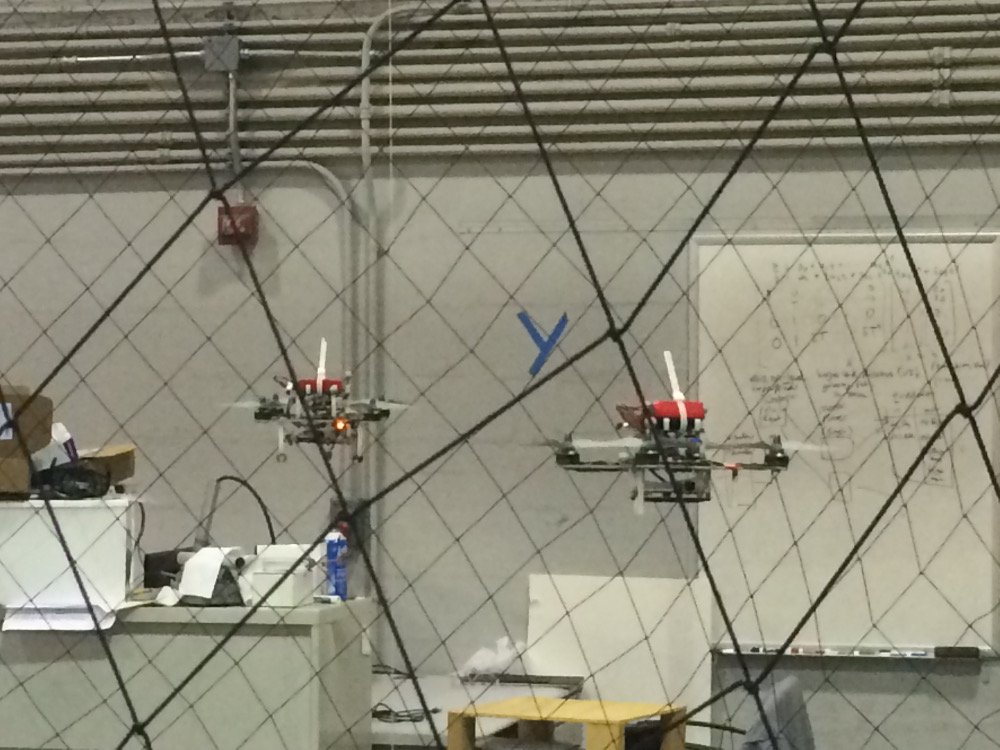 Action uncertainty is ubiquitous across autonomous robots. This is particularly true for light-weight micro aerial vehicles, which are very likely to deviate from the planned paths due to various disturbances. We have been working on motion/path/trajectory planning and goal assignment for multi-MAV systems while considering stochasticity resulting from disturbed actions.

We have developed collective decision making methods which can guide a team of homogeneous MAVs with action uncertainty to avoid obstacles and eventually reach mutually exclusive goals. One of our objectives is to design a light-weight approximation method that only needs to exploit partial state and/or action spaces, and quickly respond (e.g., replan) to changes or updates of states or rewards (e.g., emerging new tasks).

We are also interested in constrained coordination problems, where the constraints can be from the multi-robot systems and/or from the external environments. For instance, we worked on energy-constrained planning problems, where a team of aerial vehicles is deployed to pursue an objective such as surveillance, monitoring, or exploration of an indoor environment with cognizance of available onboard energy resources and pre-deployed recharging platforms. The method can be extended to other applications, for example, drone pacakge deliveries. Our work focuses on deployments which seek to balance individual and cooperative vehicle task requirements, with overall travel and energy costs and charging station availability, toward enabling extended duration operation.